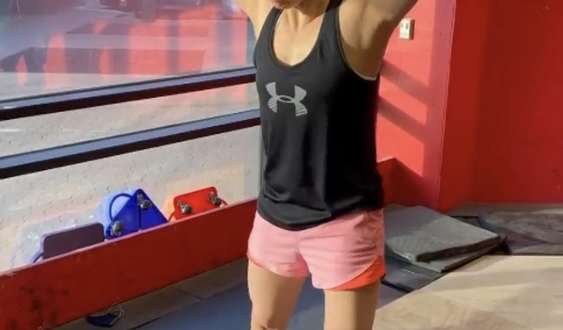 I started CrossFit when I joined Ballston CrossFit in August 2020, and my success story is still very much a work in progress. I feel like finding a gym that has become an integral part of my life is a success in and of itself. My background is that I was a college club hockey player with a penchant for snow sports who was “active” but had no interest in fitness or strength. My stress and weight snowballed after starting my first job as a surgeon in a rural area where I was isolated, depressed, and couldn’t even muster the energy to be active. I finally committed to a change when the new Orangetheory Fitness opened in town. COVID struck 3 months later but I continued working out at home and 4 months later, I moved to Arlington. At that time, I was in fair shape cardio wise, but I wanted to get stronger. What I wondered when I was looking for a gym is how is this place going to help me meet my goals as well as inspire me to make it an indispensable part of my life.

Between death by wall balls/box jumps at the free trial class and my pre-existing bias as an orthopaedic surgeon against CrossFit as a potentially dangerous activity, I didn’t think it was for me at first. Then they offered a discount on foundations and I thought learning proper lifting technique wouldn’t be a bad idea. By the end, I was interested enough to commit to 3 months. What impressed me immediately was that in my first classes, the coaches recognized that I was new, introduced themselves, and made sure that I was performing the movements safely and modifying the workout appropriately for my abilities. They were enthusiastic and knowledgeable, but what was unique was that they seemed to really care that I wasn’t getting overwhelmed or discouraged by my inexperience which can certainly be frustrating initially. Early on, I was in a few classes with a coach who wasn’t coaching the class but would still make an effort to give me advice and help with my technique which I thought was awesome and really encouraging.

I’m naturally shy, so it was hard to meet people at first as I floated around different classes 3x/week. Almost 3 months in, I upgraded my membership to unlimited and started going almost every day at the same time where there was a fairly consistent and talented core group that I was both intimidated and inspired by. Small actions make a huge difference, and a simple fist bump and “good job” at the end of class from a classmate that I hadn’t previously talked to made me feel like I belonged for the first time. Since then, I’ve had the opportunity to get to know so many awesome people and started to understand what #BCFfriendshipmachine is all about! When you move to a new city in the middle of a pandemic, finding community is an invaluable feat. Going to the gym isn’t just about working out anymore. It’s an opportunity to grow under the guidance of mentors, a chance to pursue a passion with friends who share it, and a journey toward building not only a strong and functional body but mind as well.

If the first 3 months were a trial in patience and development, the second 3 months have been an exciting time of growth. People frequently say they aren’t fit enough to do CrossFit, but that’s a misconception. My fitness level when I joined was that I had started to run on a treadmill instead of walk and I had picked up a dumbbell before, but I had never done any of the exercises that are common in CrossFit workouts. I learned how to link two double unders after 4 months and 2 months later was able to use them in my first Open workout. Even though I struggled, I was able to attempt and survive the Rx (aka most difficult) version of my first two CrossFit Open workouts ever. My weightlifting technique is slowly improving, and I feel myself getting stronger for the first time in my life. My confidence in what my body is capable of continues to grow, allowing me to continue pushing myself in every workout.

These small victories are a vital morale booster especially when the pressures of life and work seem insurmountable. It reminds me that with hard work and perseverance, even things that seemed impossible may one day be achievable. Especially in these times, it can feel like so much of life is out of our control, but when training, the work you put in correlates with the results you get out and there are no shortcuts, excuses, or saboteurs. It’s been a spectacular de-stressing environment for this type A, obsessive compulsive, perfectionist surgeon! What makes BCF special is not only programming that will inevitably improve your physical fitness if you stick with it, but community and mentorship that keep you invested and motivated even when times are tough whether in your fitness journey or life in general.