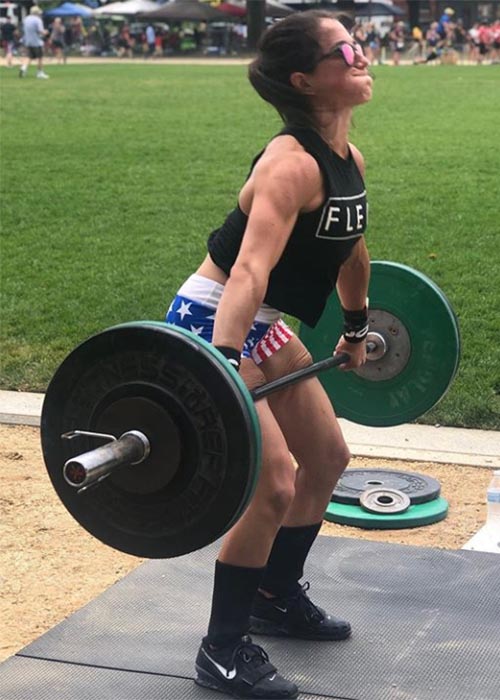 With Ballston CrossFit since January 2014.

Growing up I was pretty much obsessed with watching and playing any and all sports…and had always considered myself to be pretty fit (spoiler alert: I wasn’t). As a kid I got my black belt in Tae Kwon Do, played high school tennis, basketball, and soccer, and played club soccer in college. But after graduating college, I got into a super boring routine of waking up, running on the treadmill for 30 minutes at the Gold’s nearby before work, and that was my workout for the day. CrossFit had always been something I was curious about, but never found the right opportunity to try it out.

So, in December 2013 while I was on a work trip in Akron, Ohio, I decided to try a CrossFit workout at a local box with a coworker who had been a regular Crossfitter for about 2 years. We did a 20 minute workout involving front rack lunges, push presses, and pull ups – even using an empty 15lb barbell and 2 large bands for pullups, this 20 minute workout completely whipped my butt, had me sore for a good 3 weeks, and was probably the most fun I’d ever had working out. Naturally, this was all I needed to realize that CrossFit was something I had to have in my life. So when I returned to Arlington, I looked around for gyms nearby, tried the free class at BCF, joined Foundations just about a week later, and never looked back!

Easily my favorite part about CrossFit is the strength you’ll gain, and continue to gain, over time. I had never really known what it was like to “feel” strong and powerful mostly because all my life any exercise I’d do was solely focused on cardio/endurance, agility, and sport-specific training. There is something so empowering about powerlifting and weightlifting, and a huge part of me regrets not trying it sooner. The technique that comes along with lifts, specifically Olympic lifts, I find to be so much fun because there is always something new to learn and improve on.

Over the past couple years, coaching had always been something I’d thought about but just never made the first step toward getting myself there. Starting out 2020, I finally decided to take the plunge and get my L1 certification and join in on the BCF coaching internship program. I can easily say I’ve had more fun with coaching and learning from the team here than I could have ever imagined. I am so humbled to join the coaching team and be able to give back to the BCF community. I’ve had so much fun since joining in 2014!